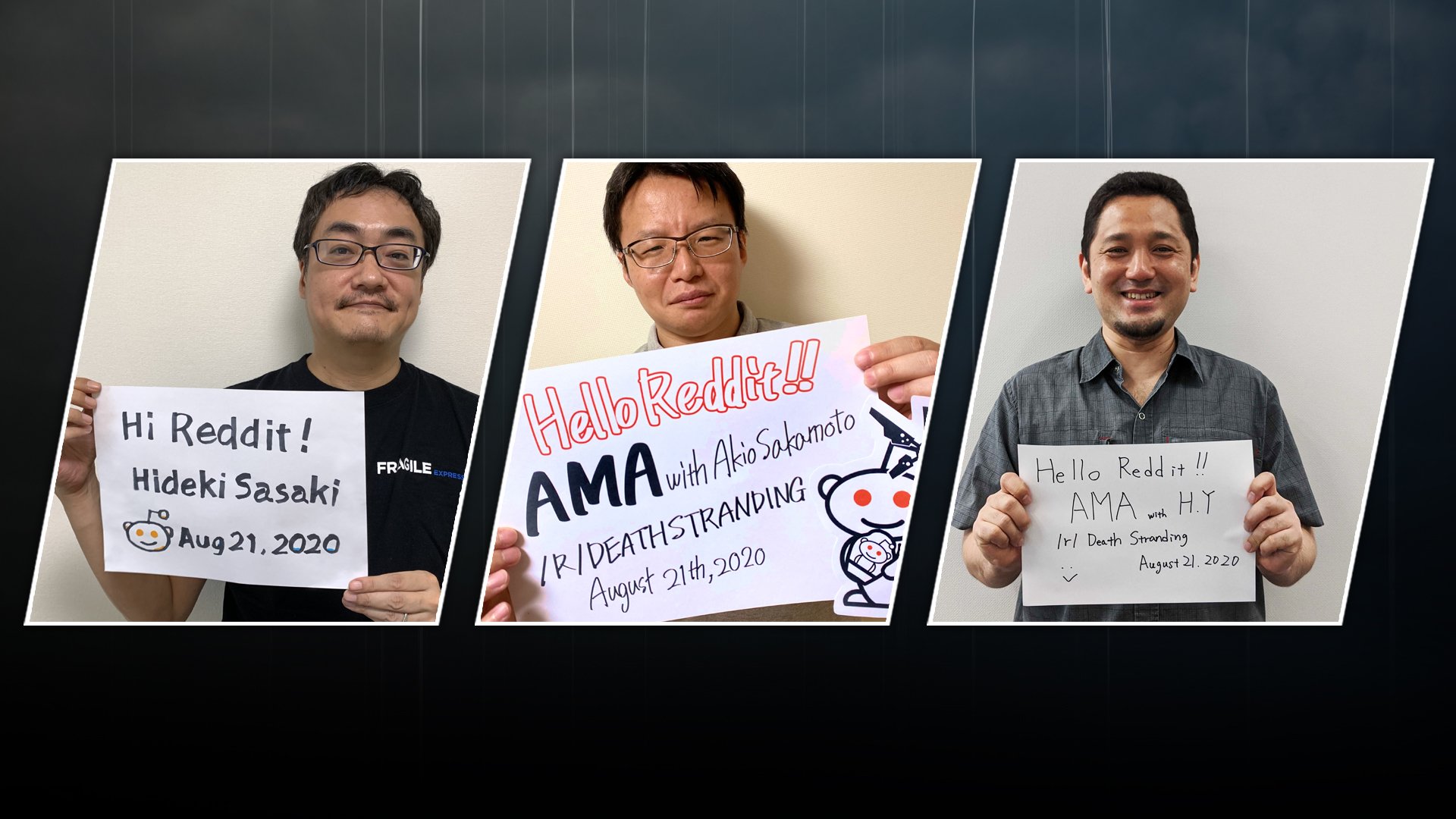 Our DEATH STRANDING Reddit AMAs have been going down well, so we decided to step it up a notch, by inviting 3 members of KOJIMA PRODUCTIONS to our third session.

Firstly, a huge thank you to our amazing community for getting involved once again and another big thank you to the team at KOJIMA PRODUCTIONS for agreeing to take part.

Check out a selection of questions below from our AMA session and head on over to Reddit for the full rundown.

USER: ParticularlySoft
Q: How did you get the snowstorms in the mountain areas to sound and feel so real?! I absolutely loved the game. Thank you for your hard work!

A: Sakamoto: I thought this would be a perfect question for the Sound Team, so I asked for their thoughts on this:

(Sound Team): We implemented playback of the wind sounds with quite complex parameters, manipulating the sound to match not only the intensity level of the snowstorm, but also the temperature, amount of snowfall, or shape of the terrain as well. Furthermore, by incorporating sounds that one normally wouldn’t think of, such as the sound of wind hitting against Sam’s body, or passing through the gaps between his back and the luggage/equipment, I think we were able to create a feeling that the player is in the same place as Sam, as well as convey the awfulness of the storm. Playing the game with 5.1ch or 7.1ch sound gives you a more immersive experience, so please do try it out if you can!

USER: Tgordonmallory226
Q: When designing the levels obviously you took inspiration from places like Iceland and Ireland, but was there many books or resources that the team researched when making the world feel realistic? Thank you!

A: Sasaki: For Iceland, we also looked at books or other documents as references, but, the environmental artists participated in an on-site scouting to collect materials. Then, we took all the photos of real-life nature the team took there and converted them to 3D data using Photogrammetry–these are the assets that we used in the game. Things like rocks, cliffs, lava, or terrain, etc.

USER: jpegmasterjesse
Q: Any examples of things you didn’t previously expect to be possible you were able to achieve with this game?

A: Yoshiike: I had an idea in my head of how we would have Sam lean or sway, and then readjust his balance, based on changes in cargo weight. But when it came time to actually implement this feature into the game it turned out to be incredibly difficult, so I am eternally grateful to the programmers on the Player Team that realized it exactly how I envisioned.

ASK ME ANYTHING
Of course, these are just a few of the many questions that were asked during the AMA session. Head on over to the fan-run Reddit page for the full rundown…

Once again, let us take this opportunity to thank the incredible DEATH STRANDING community for their support, the amazing team of Moderators who allowed us to run this AMA on the fan run subreddit, as well as Akio Sakamoto, Hideki Sasaki and Hiroaki Yoshiike for taking the time to get involved.