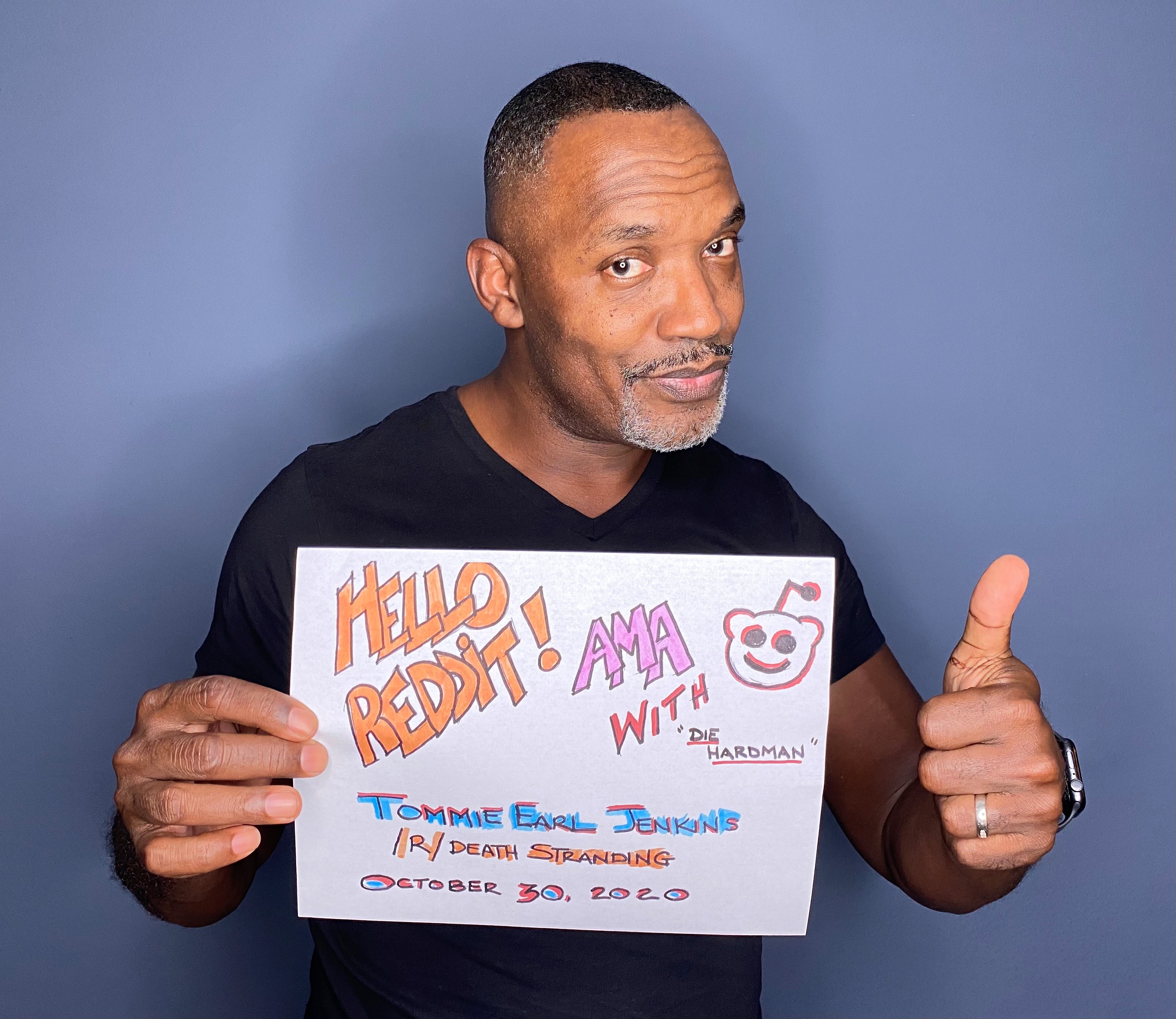 On October 30, we welcomed Tommie Earl Jenkins (AKA Die-Hardman) to the fan run DEATH STRANDING subreddit, to take part in our latest community AMA session! The response to our previous set of AMAs was overwhelmingly positive, so we decided to set another up for our amazing fans. Tommie was an absolute joy to have on board and took a significant amount of time out of his busy schedule to bridge the gap with our DEATH STRANDING community. Take a look at some of our favourite Q&As below.

USER: Phyxis_Philostrate
Q: How long did it take you to put on in the motion tracking suit each day? Were there any scenes that had to be redone a large amount of times? How much leniency did you have with your script?

A: It didn’t take long to get dressed in the suit. I think we did scenes until we got what we needed which I don’t feel were done a lot of times. Everyone was professional and incredibly talented. We as the actors had some freedom to deliver the performance that best suited us but that also stayed true to the vision and creation of Hideo Kojima’s characters.

USER: Jezdamayelcaster
Q: This is amazing! You are so kind and wonderful to everyone your fans everybody! The only question I would have is “did working with Mr Kojima on DEATH STRANDING change your life in any way? Did it make you think any differently afterwards?” It seems that the game and the making of it would have been a life-changing experience. I don’t just mean the fame I mean mentally life changing as well. A wonderful adventure!

A: Yes working with Mr Kojima and on DEATH STRANDING changed my life immensely. Just being in his presence and his energy and the way he works was fantastic. He understands the actor and their process. DEATH STRANDING made me realise how much we as nation/world need to come together in order to make it the best it can be. We as the human race have a lot of work to do. I’ve enjoyed connecting with DEATH STRANDING fans throughout this journey and I’ve learned a lot.

USER: netzahre
Q: What was your first impression/opinion of your own character? Did it evolve as you recorded lines, acted and all that? If you played DEATH STRANDING how it felt? I assume you have to get in a mindset to act as Die-Hardman as well as you did, so I’d love to hear what you thought about him.

A: My first impression of the character was “I can’t wait to play this badass!”. The character evolved as I worked. Mr Kojima did an incredible job creating this character with so much depth, gravitas, and backstory. I had a blueprint and I followed it and brought a little bit of me along with it. Playing the game was amazing. To see the finished product made me very proud to be a part of the Mr Kojima legacy.

Want to read more? Head on over to the DEATH STRANDING subreddit for the entire Reddit AMA rundown. Once again, we’d really like to take a moment to thank Tommie Earl Jenkins for getting involved as well as our super passionate DEATH STRANDING community for asking so many brilliant questions.

Keep on keeping on! 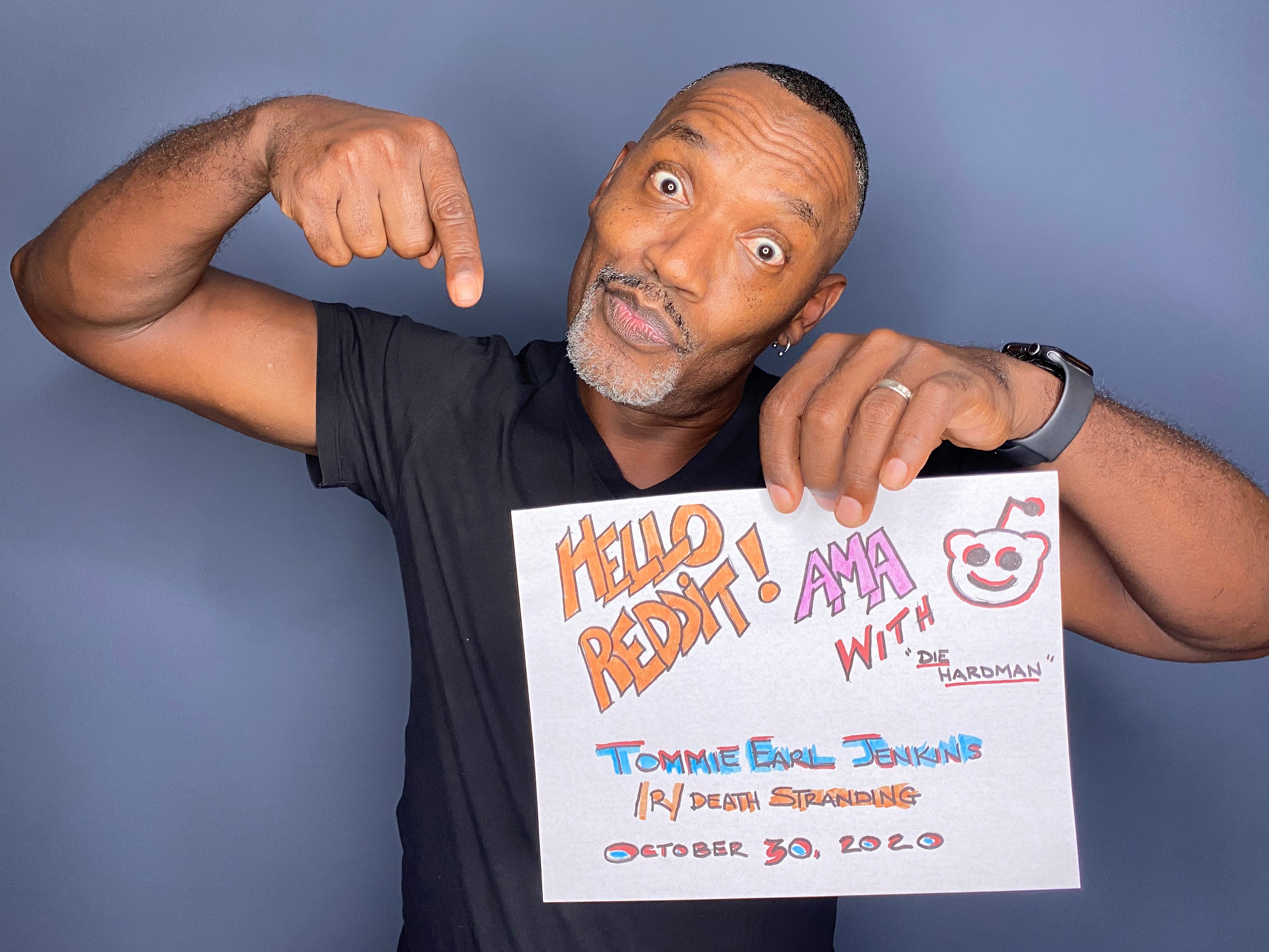